Why are there no sanitary products in school’s washrooms?

“Why are there no sanitary products in the washrooms?”

Starting with this question, Rino Nakashima, a sex education producer, planned the “Exhibition of Sanitary Products”. Last year, the exhibition held at the event, SFC Creative Week, at Keio University Shonan Fujisawa Campus (SFC) provided an opportunity to reconsider menstruation. Voice Up Japan asked Ms. Nakashima about the details of her participation in SFC Creative Week, and her reaction to the exhibition. 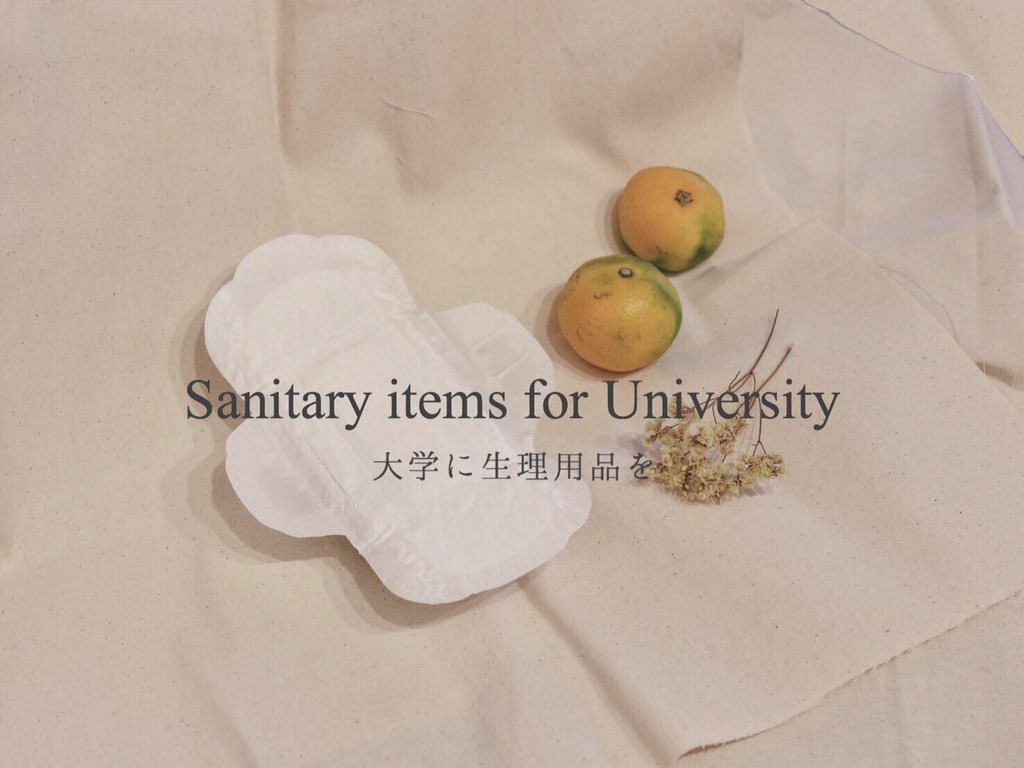 -What caused you to question the fact that there were no free sanitary products in the washrooms?

Just last year, many things about menstruation changed. A movie about periods, called “Little Miss P”* was made, and a menstrual emoji was added to the iPhone. After that, while the company was doing “#NoBagForMe”*, I was wondering what I could do as a university student. At the time, I found an article that American Twitter office and other companies already have sanitary products in the washrooms. When I saw that, I wondered why there was only toilet paper and no sanitary periods here, even though both are bodily excretions. I wanted everyone to question this again. So, when I decided to try it at my university, there just happened to be the SFC Creative Week happening, so I went with it.

-What kind of event is Creative Week?

It’s an event that turns the entire campus into an art gallery. When we first decided to put out sanitary products, there was an upcoming project called SFC Creative Week that made the entire campus an art gallery, and we just jumped on the bandwagon. The person who planned SFC Creative Week created the format of the proposal, and we said, “We want to display sanitary products in the bathroom.” We collaborated with about 10 people on campus. On top of displaying them, we put up posters in places that can be seen when you’re sitting on the toilet that show the different options for sanitary products and how to use them. I wish I could’ve had a link on the posters where people could learn more about sex.

-So you did this specifically for Creative Week?

If we didn’t have COVID-19, I thought we’d do it again starting April this year. I was thinking of expanding it to other schools as well. Because of COVID-19, putting out anything more than toilet paper in public places has become quite a challenge, so we can’t do it right now.

-On Twitter, you announced that you would “cooperate with people who want to put sanitary products in a high school or university.” Is this also difficult now?

Yes. I was trying to start a project from around September by gathering people who wanted to participate, but I was worried about my capacity to handle it all, and that it might not work during COVID-19, so I have not moved anything forward yet. Some of the people who wanted to participate were in their final year of high school, or they were about to graduate. So, we’re starting to plan events in schools as we’re able.

-There was a reaction from high school students as well!

High school students and school teachers have also contacted me. I want to do it at any school we’re able to.

-What kind of reaction did you receive from the university and students from placing these sanitary products around?

Firstly, menstruation is natural, and I think purchasing your own sanitary products is considered normal, so people’s honest reactions were something like, “Why are you doing that?” I think that a lot of university students have money, they were more like, “I can just buy them myself. I don’t need them here. Isn’t it kind of dirty to have them like this?” That’s often the reaction, but when my friend was taking classes, I heard people say, “Did you see sanitary products at school?” during breaks. I heard that it was an opportunity for conversation and rethinking menstruation. There were also opinions like, “It would be convenient to have it”, and “As a woman, I’m grateful they’re there.”

But there was a criticism: “Why do you want to make only sanitary products free?” Shaving is always compared to sanitary products. “Men also have to shave, so why are sanitary products the only things that are free?” I thought it was really strange that so many people compare periods with shaving. Once, when I tweeted that the cost of sanitary napkins would cost hundreds of thousands of yen in a lifetime, people argued with me that the cost of shaving was 1.4 million yen. It was very strange to think that we could talk about these two things in the same line. I don’t really understand it. I think we should think more carefully about this.

Actually, if COVID hadn’t happened, I would have expanded my activities to various universities. Because everyone uses the washrooms, I would have liked to create an environment where even people who are not interested can start asking questions. After all, I personally think that it is very difficult to change all of Japanese society, so I think that private companies and governments need to make a change. I think it is necessary for each company to change, just like the American Twitter office paid to put free sanitary products in the washrooms, or how the Scottish government made them free. Society needs to move as a whole, for example with the support from the government.

-Do you think that the awareness of menstruation is different between generations?

As for sex education as a whole, for example, if you use words such as “sex” (in a search engine), adult sites will inevitably appear as the top hits. I would like to sign a petition to push search engine service such as Yahoo! or Google to have a site that can show appropriate information when someone searches “sex”. Even when you search “periods”, I would like them to create a mechanism that allows articles with scientific grounds to appear at the top as much as possible. As a way to approach these types of problems, I think collecting signatures is good too; I’m thinking about it.

*2“#NoBagForMe” is a project started by Uni-Charm in 2019. They are developing new designs and products with the aim of becoming a “world where you can talk about menstruation and sanitary products without hesitation”. http://www.unicharm.co.jp/company/news/2019/1211463_13296.html.